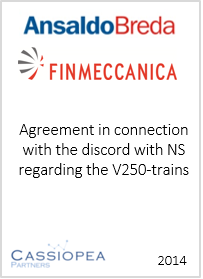 The Dutch Railways (“NS”), AnsaldoBreda (“AB”) and its controlling company Finmeccanica (“FNM”) have concluded a solution to the discord regarding the V250-trains. The companies have reached an agreement that entails the return of all V250-trains to AB and the reimbursement of 125 million euros to NS.

The conclusion was reached from the advantages both parties see in preventing of lengthy legal proceedings, which would demand energy and money over a period of years. This agreement allows AB to exert its energy and financial means towards high-speed train projects with other customers, while the NS can close the case and completely focus on its business activities.

The newly reached solution includes the return of all trains to AB. A practical procedure for such return will be drafted, including (to the extent necessary) permission from the authorities involved for the transportation of the trains.

The agreement will allow AB to exploit the possibility of selling such trains to other customers and with some customizations make them fit for other requirements and needs of such customers. In the event of successful resale, the agreement provides that NS will receive additional payments amount per train from AB up to a total maximum of 21 million euros.

Both parties consider the trains restorable to return to commercial operation in due time. The disagreement between the parties reflected a different estimation of the conditions under which such restoration could be done. Fundamentally it did not entail the robustness of the train design but mainly concerned acceptable deadlines for repairs and employability that were inconsistent with NS needs and the financial consequences.

As part of the agreement, both parties will refrain from making financial claims, including supposed damages on both sides.